At NGC, we pride ourselves on having a secure, safe, and well-maintained property to promote responsible fun for all.  Please take a moment to read our safety standards and rules. If you are a first time visitor to the club, please print and sign the release and safety forms below.  Thank you for your cooperation and for helping us keep our club a safe place to shoot! 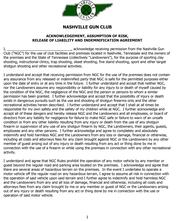 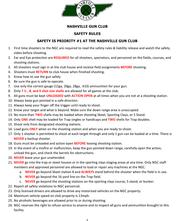 SAFETY IS PRIORITY #1 AT THE NASHVILLE GUN CLUB

1.  First time shooters to the NGC are required to read the safety rules & liability release and watch the safety video before shooting.
2.  Ear and Eye protection are REQUIRED for all shooters, spectators, and personnel on the fields, courses, and shooting stations.
3.  All shooters must sign in at the club house and receive field assignments BEFORE shooting.
4.  Shooters must RETURN to club house when finished shooting.
5.  Know how to use the gun safely.
6.  Be sure the gun is safe to operate.
7.  Use only the correct gauge (12ga, 20ga, 28ga, .410) ammunition for your gun.
8.  Only 7 ½ , 8, and 9 shot size shells are allowed for all games at the club.
9.  All guns must be kept UNLOADED with ACTION OPEN at all times when you are not at a shooting station.
10.  Always keep gun pointed in a safe direction.
11.  Always keep your finger off the trigger until ready to shoot.
12.  Know your target and what is beyond. Make sure the down range area is unoccupied.
13.  No more than TWO shells may be loaded when shooting Skeet, Sporting Clays, or 5 Stand.
14.  Only ONE shell may be loaded for Trap singles or handicaps and TWO shells for Trap doubles.
15.  Shoot only from designated shooting stations.
16.  Load guns ONLY when on the shooting station and when you are ready to shoot.
17.  Only 1 shooter is permitted to shoot at each target through and only 1 gun can be loaded at a time. There is NEVER a backup shooter.
18.  Guns must be unloaded and action open BEFORE leaving shooting station.
19.  In the event of a misfire or malfunction, keep the gun pointed down range, carefully open the action, unload the gun, and check the barrels for obstructions.
20.  NEVER leave your gun unattended.
21.  NEVER go into the trap or skeet houses or in the sporting clays staging areas at any time. Only NGC staff members and approved personnel are allowed to load or repair any machines at the NGC.
22.  NEVER go beyond Skeet station 8 and ALWAYS stand behind the shooter when the field is in use.
23.  NEVER go beyond the 16 yard line on the Trap field.
24.  NEVER go beyond the shooting stations on the sporting clays course, 5 stand, or bunker.
25.  Report all safety violations to NGC personnel.
26.  Only licensed drivers are allowed to drive any motorized vehicles on the NGC property.
27.  Maximum vehicle speed on club property is 13mph.
28.  No alcoholic beverages are allowed prior to or during shooting.
29.  NGC reserves the right to refuse service to anyone and to inspect all guns and ammunition brought to this facility.
30.  The NGC appreciates any help you give us in picking up your spent shells. There are trash drums located next to the stations on the sporting

clays course and trash drums located on all trap/skeet fields.
31.  Make sure you and your guests are in compliance of all club rules. Members will be held responsible for their guests’ actions.